“The Department of Justice’s requests for fiscal year, 2022 include a number of positions and initiatives that we viewed to be critical needs in the pursuit of all the goals and priorities I have just defined,” said Attorney General Kathy Jennings.

During a presentation of the Department of Justice’s proposed Fiscal Year ’22 budget to the Joint Finance Committee Wednesday–in which they sought a 1.7% funding increase to $40.3 million–Jennings said the department has a lot they needed help to accomplish. 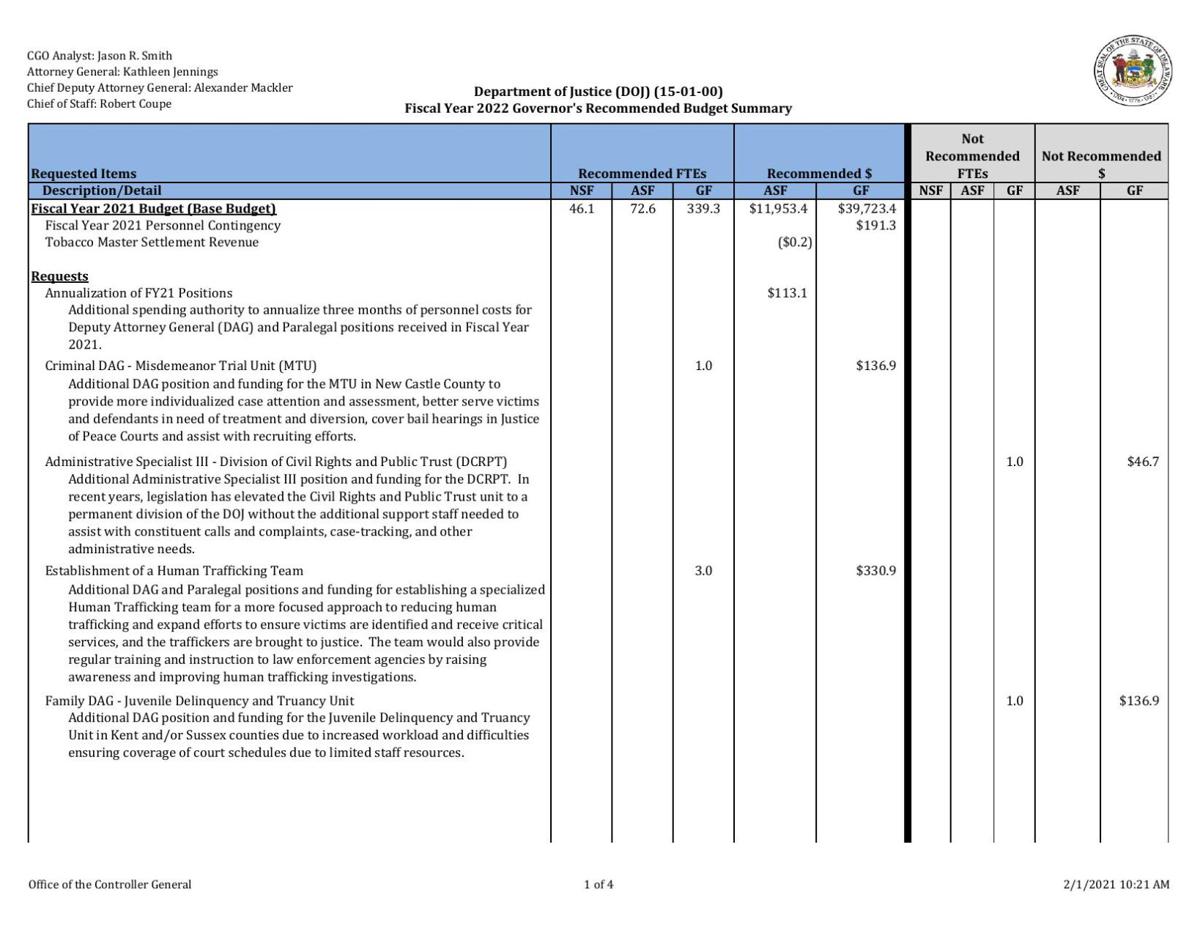 “There’s a lot of work we do on a daily basis, and areas where we vitally want to–and need to–do more,” she said.

The DOJ detailed funding requests for a number of specialized units seeking to create a more fair and equitable justice system, but focused primarily on major moves like the proposed body camera initiative for all officers and the establishment of a Human Trafficking Team.

“Several years ago, the human trafficking statute was created after a great deal of work by our office, our Family Division head Abby Rogers, and the legislature coming together,” Jennings said. “There has been, however, no additional funding for the effort itself. And so this year, we have created a Human Trafficking Unit to respond to this much needed effort, and to make sure that there is both investigative and legal help available to combat human trafficking. We are focused on reducing human trafficking in Delaware, both on the civil side by shutting down illegal establishments, as well as on the criminal side by holding those accountable who engage in this terrible crime.”

To catch human traffickers takes a great deal of proactivity, Jennings said. She defended that the request wasn’t for an “uptick” in this kind of activity, but a dedication to protecting victims and finding and prosecuting perpetrators who have always committed these types of crimes.

“Human trafficking is one of those crimes that if you’re not out there looking for it,” she said. “You have to really understand it, know where to look for it, and get started with the investigation. Now, our state police does a really good job. There’s just needs to be a central place where all of these cases come.”

The body camera program, in particular, would need roughly $4.5 million annually and 22 personnel positions to stay up and running. The DOJ clarified it wasn’t seeking the full amount to get the entirety of police forces in Delaware  up and running in the first year, and would instead roll out the program over a period of time, if the committee preferred a tiered approach to ease sticker shock. Jennings pointed to departments already operating body camera programs to show the labor intensiveness of such programs.

“We very much advocate for, along with the legislature and the governor, for a statewide body-worn camera system that will build public trust and support,” she said. “In 2019, the New Castle County Police uploaded 125,000 pieces of footage by 331 officers. The average amount of video is 30 minutes of each video, and it requires a minimum of about 50 minutes to review and redact. Deputies have to review these because we’re constitutionally required to do so, and paralegals have to redact because they are statutorily required to protect witnesses and victims from identification.”

Jennings said other focuses include advocacy and helping keep non-violent offenders out of prison and focusing more on those who deserve to be there, while also reforming the bail system in the state to make staying out of jail easier for those who might need help over punishment.

“As we look forward to what wat progress we can now make, it’s important that our priorities…

Many of these ideas were presented in Jennings’ legislative priorities released a day prior to the JFC hearing. On those priorities, she received some pushback from Republican state Sen. Dave Lawson (R-Marydel), who’s a retired Delaware state trooper.

He also wanted to know what the AG’s office was doing to help landlords facing financial crisis just as often as renters were, and whether the DOJ planned to investigate shootings as seriously where an officer was the targeted victim as those cases which involved an officer pulling the trigger. That last topic led to this exchange:

Lawson: “Are you going into that same depth to find out what brought it about, and what the cause of it was, and the background to that as deeply as you do into the officer-involved shooting?”

Jennings: “When an officer is shot, I absolutely cannot imagine that we wouldn’t put our best, most experienced deputy on that case and prosecute it to the maximum.”

Lawson: “And the shootings on the street, what gives there? I mean, there’s so many of them now. Thirty-three in Wilmington, 12 in Kent County, are they now just another pretty much run-of-the-mill case, or is that in-depth investigation going into that as well?

Jennings: “Well, the police investigate those shootings, but I can tell you they’re the highest priority also. We have deliberately and methodically worked on criminal justice reform for people who are not violent, for people who shouldn’t be in jail, for people who need help, so that we can focus on those who are.”

But Lawson was most vocal about his displeasure that Jennings would have the idea that she should present any kind of legislative agenda.

“One more thing Kathy, if I may. I saw with great interest your legislative priorities for 2021,” Lawson said. “Wow.”

He said Jennings was targeting citizenry who shouldn’t receive such scrutiny for their desire to possess weaponry, and told Attorney General Kathy Jennings to “stay in her lane.”

“I think on the gun-side of it–and we are definitely on the opposite side of things here–that you’re looking to make law-abiding citizens criminals, instead of prosecuting criminals,” he said. “I take great exception to you coming out with a legislative agenda because I think you’re way outside your lane on this issue as a prosecutor. There is no such thing as a legislative agenda, you have a job to do in prosecuting and protecting the people of the state of Delaware, and for you to step over in the legislative lane, I think is out of line, ma’am.”

Jennings informed Lawson permit-to-purchase laws have led to a nationwide gun homicide reduction of 40%, of which, without presenting any kind of contrary evidence, Lawson was incredulous.

“That’s questionable, but OK,” he said.

She also received some pushback on her decision not to pursue charges against Black Lives Matter protesters over the summer during public comment.

“In summer of 2020. There was a group of people that came to Camden, which is near where I live. They created a severe health and safety issue for the people in the area. Delaware State Police, Camden Police, and the city of Dover Police came in, did the proper job, they cleared the people from the area, processed them through the court,” said Robert Overmiller. “I became dissatisfied when I found out that the attorney general’s office decided none of these people should face any of the charges for the crimes they committed. I’m against the idea of adding additional funding when you can’t hold charges against somebody that you should have.”

But Jennings also found a great deal of support, from human trafficking and child advocacy groups, and in Democratic state Sen. Laura Sturgeon (D-Brandywine Hundred), who said Jennings has “really rocked it out.”

“I am so proud of our attorney general, the reforms that she has espoused around criminal justice reform to make the system more equitable for people who are low income and people of color,” Sturgeon said. “Per her understanding of issues so far ranging make her, I think, an excellent spokeswoman for the best legislation we can do to make Delaware safer and more equitable. I am grateful she and her office have helped us put forward legislation to address the opioid epidemic, legislation to help…equity in criminal justice. And, frankly, I’m very much aligned with the attorney general because the data backs it up on reforms around gun laws that will make people safer.” 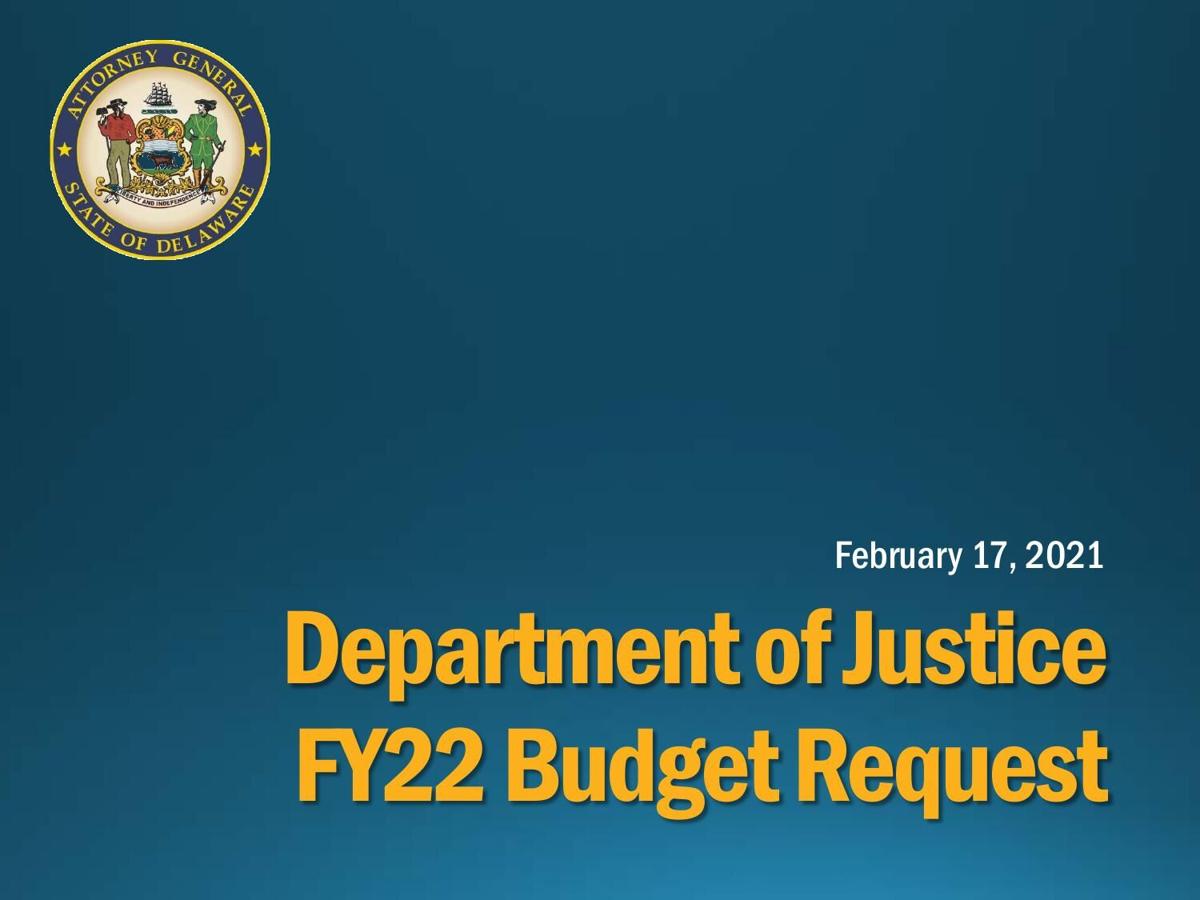