Lawmakers were nearly unanimous in their votes in favor of Delaware’s $1.35 billion capital improvement budget, but several expressed reservations about the idea of spending so much money. The spending bill is $400 million more than the FY 2021 capital budget approved last year.

He said both bills represent the state’s commitment to sound financial principles.

“If you think about it, look at other states across the country, the ones that are struggling and have trouble, they don’t do it right,” Carney said. “They’re not able to, in the long term, to provide the necessary services for the people that they work for, and they’re not able to attract additional employers to their state which largely make a lot of that revenue possible.

The capital budget, also referred to as the bond bill, allocates state money to pay for construction projects and maintenance on state facilities including roads, schools and courthouses throughout Delaware. 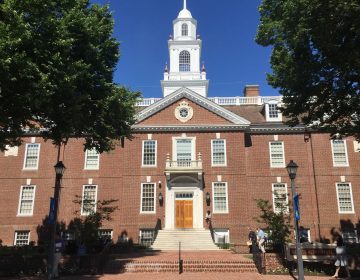 Delaware’s $4.77 billion operating budget was approved days before the June 30 deadline, but lawmakers have lots of work before the end of session Wednesday.

Highlights of this year’s historic spending bill include nearly $500 million in transportation infrastructure improvements and more than $300 million for schools, including K-12 and higher education. Another nearly $200 million is being set aside for economic development, and $150 million will fund the construction of new family court facilities in Kent and Sussex counties.

Republican State Rep. Lyndon Yearick was the only one out of 62 lawmakers to vote against the bond bill.

“It’s kind of like deja vu all over again. You know, 12 months ago, we were at the same precedent in that we were at an all-time record high in the capital bond bill spending. Well, we sure blew past that,” Yearick said Tuesday.

Yearick acknowledged that all members of the General Assembly, including himself, would benefit from bringing funding to projects in their districts, but he questioned whether more funds shouldn’t have been returned directly to taxpayers in such a year of plenty.

“I think it’s rather disingenuous coming out of a pandemic with plenty of Delawareans still suffering, who have lost jobs, that have had their businesses suffer, that we’ve added over $400 million towards this,” he said.

Democratic Rep. John Kowalko was the only one in Dover to abstain from voting on the bill, citing concerns over economic development spending such as this week’s announcement that $19 million from the state’s strategic fund would be used to entice Shanghai-based Wuxi STA to build a pharmaceutical manufacturing complex in Middletown.

“Once again, this money is being placed on the table, taxpayer money, for access and use of some of the wealthiest corporations in the world,” Kowalko said. “When I see the massive amounts of taxpayer investment, I feel, justly, that we are never attempting to address this excess.”

Others, like Republican Rep. Mike Ramone, supported the bill because the state has lots of projects that need funding, but he offered that perhaps it’s time to address the idea of returning some of the excess surplus money to residents.

“You were both very focused on having the largest impact on the state of Delaware in areas that have been denied, like the incredible backlog of deferred maintenance in our schools and in our buildings,” Ramone told leaders of the Bond Bill Committee.

“I brought this up during Bond [Committee meetings], and I was clearly told that ‘that’s not the time to have the discussion about tax refunds and giving money back.’ And I understand that, and I am standing today simply to begin that conversation for next year,” Ramone said.