Twenty-five years ago, state transportation officials were exploring an idea to dualize Route 24 from the Route 113 intersection in Millsboro to the Route 1 intersection near Rehoboth Beach.

And just as with plans to dualize Route 404/9 from the Maryland line to the beaches, the idea was not met with much public support.

However, he said, parts of the plan are coming to fruition on the east side of Love Creek bridge with the ongoing Route 24 widening project. East of the bridge, projects are designed to solve increasing traffic-capacity issues, but on the west side, projects are aimed at safety and operational improvements, not major capacity projects, he said.

Long-term plans could include widening Route 24 beyond Love Creek to the Camp Arrowhead Road area, he added.

DelDOT officials had a virtual workshop Feb. 25 to update the public on projects scheduled for the Route 24 corridor.

Route 1 to Mulberry Knoll Road area near Love Creek Elementary School. Road widening to four lanes with a center turn lane and intersection improvements. Construction is underway and expected to be completed in 2022.

Route 5 and Route 23. Intersection improvements including curbing, turn lanes, bus stop, sidewalks, crosswalks and bike paths. Construction will start in spring 2021 and be completed in fall 2022.

Questions from the public

Luszcz was asked why the planned traffic signal at the Mulberry Knoll-Route 24 intersection could not be constructed now and not in two more years,

He said the signal can’t be installed until all roadwork is completed.

“We have to be very careful where we put traffic signals,” Luszcz said. “The perception is that they solve all the world’s problems, but we are finding traffic injuries increasing at signals. This particular signal is being placed here more because of development.”

Several residents asked about a second bridge over Love Creek since the road east of the bridge will be widened. “There are no plans for a bridge. That’s a much longer-term project,” said Charles “C.R.” McLeod, director of DelDOT community relations.

DelDOT officials said a dedicated bicycle lane along the corridor is not part of the overall project. Luszcz said while bicycle-pedestrian lanes will be included during intersection improvements, the rest of the corridor will not be connected. He noted that Route 24 has a wide shoulder on both sides of the roadway.

“All data is subject to change. This is the best information we have at this time,” Luszcz said. “There are a multitude of things that could delay projects.”

Those include utility relocation, purchase of rights of way taking longer than expected, and the scope of the environmental assessment process.

The eastern end of the Route 24 corridor is included in the 24-square-mile Henlopen Transportation Improvement District, which has its own series of road and intersection improvements.

In the district, developers will pay fees attached to new residential and commercial construction. Twenty-four percent of the cost will be covered by developers. DelDOT will provide the remaining 76 percent of funds for projects through its six-year capital transportation program.

DelDOT planners project 12 new traffic signals, 13 roundabouts and 15 intersections with turn lanes, and four miles of new road connections, totaling nearly $284 million, will be necessary within the district to keep pace with current and future development.

For more information, go to deldot.gov/projects/index.shtml?dc=corridor&name=sr-24.

Looking east toward Route 1, workers are adding two lanes and a center turn lane to Route 24. 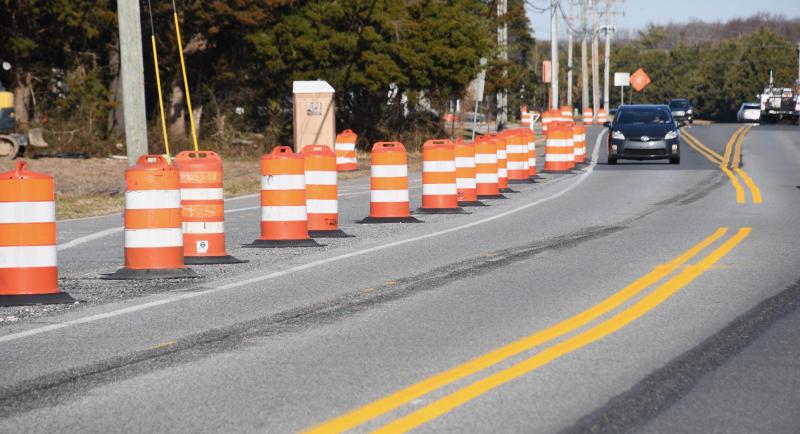 Work is underway to add turn lanes to the Plantation Road-Route 24 intersection, one of a series of improvements planned along the busy corridor.
https://www.capegazette.com/article/deldot-outlines-schedule-route-24-projects/216189