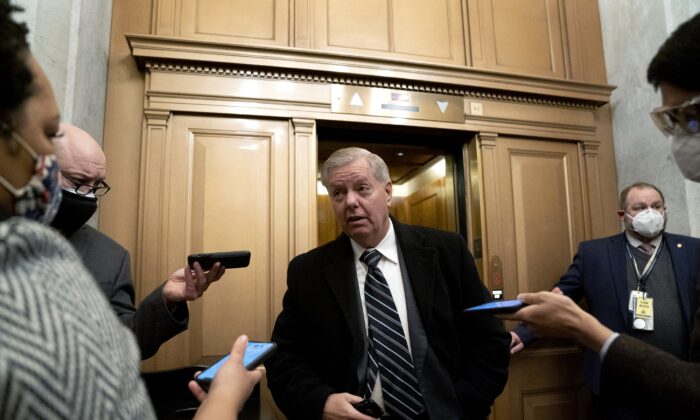 Graham told reporters in Washington on Friday that he wants Trump to work with the GOP in its bid to flip the House of Representatives and Senate in the 2022 midterm elections.

“I’m going to try and convince him that we can’t get there without you, but you can’t keep the Trump movement going without the GOP united,” Graham said. “If we come back in 2022, then it’s an affirmation of your policies. But if we lose again in 2022, then it’s going to be—the narrative is going to continue that not only you lost The White House, but the Republican Party is in a bad spot.”

Graham was leaving the U.S. Capitol after another day of an impeachment trial against Trump.

Trump has remained out of sight since leaving office on Jan. 20, releasing few statements and primarily communicating through intermediaries.

Jason Miller, a senior adviser to Trump’s 2020 campaign, said last month that Trump will “make sure” Republicans win the House in 2022.

“He’s got a ton of money. He’s the biggest name. He’s going to get that done,” he said while on Steve Bannon’s “War Room.”

But Trump and some of his supporters are disenchanted with a slew of Republicans who are up for reelection that year, believing they didn’t stand by him during the turmoil that unfolded after the presidential election.

Trump called on South Dakota Gov. Kristi Noem to primary Sen. John Thune (R-S.D.), a member of the Republican Senate leadership, and Trump allies in Congress are backing challenges to Rep. Liz Cheney (R-Wyo.), the House GOP chair, after she sided with Democrats to impeach him.

House Minority Leader Kevin McCarthy (R-Calif.) has publicly supported Cheney amid calls for her resignation from the leadership team but also convened recently with Trump in Florida. Trump’s team called the meeting “good and cordial,” and said topics included how Republicans will win back the lower chamber in 2022.

“Trump’s popularity has never been stronger than it is today,” the team said, “and his endorsement means more than perhaps any endorsement at any time.”