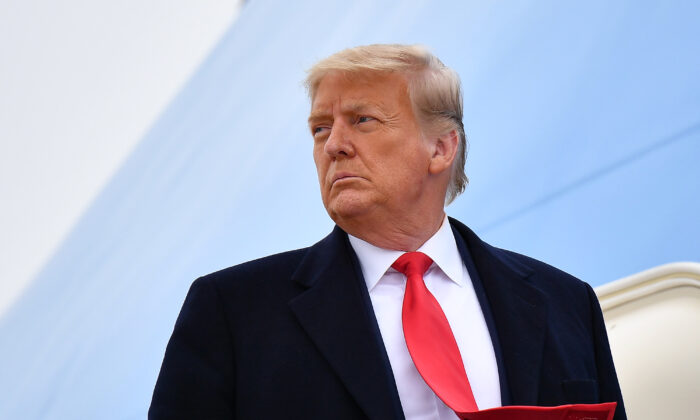 President Donald Trump has ordered the declassification of previously confidential documents related to “Crossfire Hurricane,” the FBI’s investigation of his 2016 campaign.

The move comes on his last night in office.

The materials were not immediately made known to the public.

The Department of Justice provided the White House on Dec. 30, 2020, with a binder of materials related to the FBI’s Crossfire Hurricane investigation, portions of which were classified and not released to Congress or the public, Trump said in a memorandum for the attorney general, the director of National Intelligence, and the director of the CIA.

Trump said that the FBI, in a response letter on Jan. 17, “noted its continuing objection to any further declassification of the materials in the binder and also, on the basis of a review that included Intelligence Community equities, identified the passages that it believed it was most crucial to keep from public disclosure.”

“I have determined to accept the redactions proposed for continued classification by the FBI in that January 17 submission,” Trump said. “I hereby declassify the remaining materials in the binder. This is my final determination under the declassification review and I have directed the Attorney General to implement the redactions proposed in the FBI’s January 17 submission and return to the White House an appropriately redacted copy.”

The president added, “My decision to declassify materials within the binder is subject to the limits identified above and does not extend to materials that must be protected from disclosure pursuant to orders of the Foreign Intelligence Surveillance Court and does not require the disclosure of certain personally identifiable information or any other materials that must be protected from disclosure under applicable law. Accordingly, at my direction, the Attorney General has conducted an appropriate review to ensure that materials provided in the binder may be disclosed by the White House in accordance with applicable law.”

The FBI’s Crossfire Hurricane counterintelligence investigation into the 2016 Trump campaign was launched in July 2016 to investigate allegations of Russian interference in the 2016 U.S. presidential elections, including possible links between Russia and any political campaigns.

The investigation was taken over in May 2017 by then-special counsel and former FBI Director Robert Mueller. By April 2019, he concluded that the investigation found no evidence to establish that Trump or his campaign had knowingly conspired or coordinated with the Russian government to sway the outcome of the election, although the Russian government was found to have interfered in the 2016 election.